The first DINAcon celebrates digital sustainability with icons and awards

Today, the first DINAcon was successfully staged in Bern with over 250 participants. With the launch of 17 icons on digital sustainability and the first-time presentation of the DINAcon Awards, DINAcon celebrated two premieres. The winners of the DINAcon Awards are the video conferencing solution Jitsi Meet, the open source medical practice solution Elexis, the Swiss OpenStreetMap Community, the Open Network Infrastructure Association and the Linux distribution SUSE.

With more than 250 participants, the DINAcon took place for the first time today at Welle7 in Bern. This new conference on digital sustainability reflected what embodies the idea of digital sustainability: diversity, openness, creativity, and benefits for civil society. The audience was greeted by the Mayor of Bern and Parldigi co-founder Alec von Graffenried. In her keynote speech, Fairphone co-founder Bibi Bleekemolen pointed out the disastrous conditions in the production and disposal of smartphones and showed how Fairphone 2 is an alternative to a modular, largely fairly manufactured open source based smartphone.

Subsequently, the National Council and core Parldigi team member Balthasar Glättli criticized the new "platform capitalism" of the multinational IT companies and pointed out the danger of privatizing knowledge. A paradigm shift towards digital sustainability is important. To this end, he presented the new icons that visualize the concept of digital sustainability and the focal themes of Parldigi. The 17 icons are now released under the Creative Commons Zero CC0 license.

During the 20 sessions, participants were engaged in discussions about the latest open source technologies, block chain applications, Internet of Things infrastructures, Wikipedia editing as well as new legislation such as BÜPF, NDP and the URG.

The highlight of the day was the DINAcon Awards, which were presented for the first time today. Of the 26 nominated projects, five particularly outstanding entries were selected by the jury of experts. The winner of the Open Source Classic Award is the video conferencing solution Jitsi Meet. The Business Award went to Elexis, the open source medical practice solution. The award for particularly committed communities was presented as an Open Source Hero Award to the Swiss OpenStreetMap Longterm Contributors. The Open Network Infrastructure Association has won the Open Internet Award for its commitment to a free Internet of Things infrastructure. And the Special Award went to SUSE, a renowned Linux distribution.

The first DINAcon is not over yet. From 6 p.m. around 50 people will be hacking open source and open data projects all night long at the HACKnight - digital sustainability in practice, so to speak.

The example of Fairphone: How digital sustainability works!

Whether as an opinion leader, provider, decision-maker, inventor, hacker, citizen or user: the digital transformation affects all areas of life, is inexorable and provides radically new challenges. DINAcon, the first conference on digital sustainability, shows how this change can be sustainable, open and fair. Among other things, Bibi Bleekemolen from Amsterdam will be presenting the revolutionary Fairphone, its modular technology and the brand new camera.

The versatile DINAcon agenda at Welle7 in Bern on Friday, 20th October 2017, proves on several occasions that the digital can go hand in hand with sustainability. Prominent keynote speakers show how to bridge this apparent contradiction in an innovative way:

Bibi Bleekemolen, co-founder of the Dutch smartphone brand, presents the new camera module for the Fairphone exclusively in the plenum of DINAcon in Switzerland. Without technical knowledge, Fairphone owners can easily replace the old mobile phone camera themselves. With this modularity, Fairphone counteracts the throwaway culture. Bleekemolen explains:

„Our goal is to extend the life of electronics by giving customers self-determination and autonomy via the smartphone. The design and user experience of Fairphone allows a unique look inside the product: into the manufacturing process, materials and repair and update possibilities. In this way, we inspire customers to control the life cycle of the phone from a technical and psychological point of view."

National Councilor Balthasar Glättli will then give the audience further explanations from a political perspective:

„Digital transformation is a rapid and far-reaching process to which politicians are responding with premature enthusiasm or concern. Against this background, the concept of digital sustainability is becoming increasingly relevant. It provides a framework for action and approaches to meet the technical and societal challenges in a long-term and open manner."

Afterwards Glättli discusses visions of the future with Clara Vuillemin, Head of IT Republik and the National Councillors Franz Grüter and Kathy Riklin. Current areas of application are the focus of the over 20 sessions and the DINAcon Awards ceremony. The awarding of one of the 26 nominated projects and persons concludes the conference with a pioneering spirit. And if you want to do it yourself, you can hit the keyboard on the DINAcon HACKnight.

DINAcon Awards 2017: The nominees are known

The DINAcon Awards will be presented to digitally sustainable projects and organisations today in one month's time as part of the first DINAcon on 20th October 2017. They are characterised by the courage and innovative strength of companies, authorities, communities, developers and individuals. Now the 26 nominees are known.

The project entries represent the entire spectrum of digital sustainability: from classic open source software projects such as the free and decentralized Dropbox Alternative Nextcloud, open data applications such as the offline medical database for developing countries Wikimed, open source applications in the corporate environment such as the Swiss container platform APPUiO to the open IoT platform of the Open Network Infrastructure Association. The complete list of 26 nominated projects and organisations can be found here: https://dinacon.ch/en/nominationen

Until now, the award ceremony has been held under the name CH Open Source Awards. With the new name DINAcon Awards, the organizers want to take account of the development in open data and digital sustainability and expand the spectrum of the award ceremony. A jury of recognized experts and entrepreneurs nominated and selected the winners of the DINAcon Awards 2017, which will take place today in one month's time on Friday, 20th October 2017 as part of the DINAcon 2017: https://dinacon.ch/en/agenda

The DINAcon is organised by the Research Center for Digital Sustainability of the University of Bern in cooperation with the Parliamentary Group on Digital Sustainability (Parldigi) and several associations (Opendata.ch, CH Open, tcbe.ch etc.) in Welle7 Workspace near Bern railway station. More than 200 decision-makers and opinion leaders from politics, business, the public sector and the digitalisation scene are expected. In the plenary session, Bibi Bleekemolen, co-founder of Fairphone, as well as the National Councillors Balthasar Glättli, Franz Grüter and Kathy Riklin will give lectures.

In the more than 20 sessions on Open Source, Open Data, Blockchain and many other areas, experts will provide in-depth insights into current topics of digital sustainability. The conference is supported by Welle7 Workspace as location sponsor, the Haslerstiftung and the corporate sponsors Snowflake, Puzzle, ewb, APP, Avintis, seantis, ICG, Liip and why! open computing. The current programme can be found at: https://dinacon.ch/en/agenda

Digital transformation is ubiquitous - but how can we ensure that it also generates sustainable benefits for our society? This and other questions will be dealt with at the conference for digital sustainability DINAcon, which will take place for the first time on Friday, 20th October 2017 at Welle7 Workspace in Bern, Switzerland.

More than 200 decision-makers and opinion leaders from politics, business, the public sector and the digitalisation scene are expected to attend DINAcon. In the plenary session, Bibi Bleekemolen, co-founder of Fairphone, as well as the National Councillors Balthasar Glättli, Franz Grüter and Kathy Riklin will give lectures. In the over 20 sessions, experts will provide in-depth insights into current topics of digital sustainability.

Toni Caradonna and Prof.Dr. Mirjam Eggen, for example, will talk about blockchain application examples or Kurt Meister from Fablab Bern will offer an introduction to 3D printing. The latest security and data protection technologies will also be presented live and ways of increasing digital autonomy will be demonstrated. Representatives of Wikimedia Switzerland give insight into the mechanisms of Wikipedia and explain how to edit contributions correctly. And the OpenStreetMap professionals Michael Spreng from the Swiss OpenStreetMap Association and Prof. Stefan Keller from the Rapperswil University of Applied Sciences will present the free map project and demonstrate how it can be put to practical use.

The current agenda can be found at: https://dinacon.ch/en/agenda

The DINAcon Awards will also be presented at the end of the conference. The awards are presented to digitally sustainable projects and organisations and are intended to honor the courage and innovative strength of companies, authorities, communities, developers and individuals. Those who still haven't had enough after that can continue programming at HACKnight until midnight, even on important open source projects and innovative open data apps.

The event is organised by the Forschungsstelle Digitale Nachhaltigkeit of the University of Bern in cooperation with the Parliamentary Group on Digital Sustainability (Parldigi) and several associations (Opendata. ch, CH Open, tcbe. ch etc.) in Welle7 Workspace near Bern railway station. The conference is supported by Welle7 Workspace as location and the corporate sponsors Snowflake, Puzzle, ewb, APP and why! open computing. 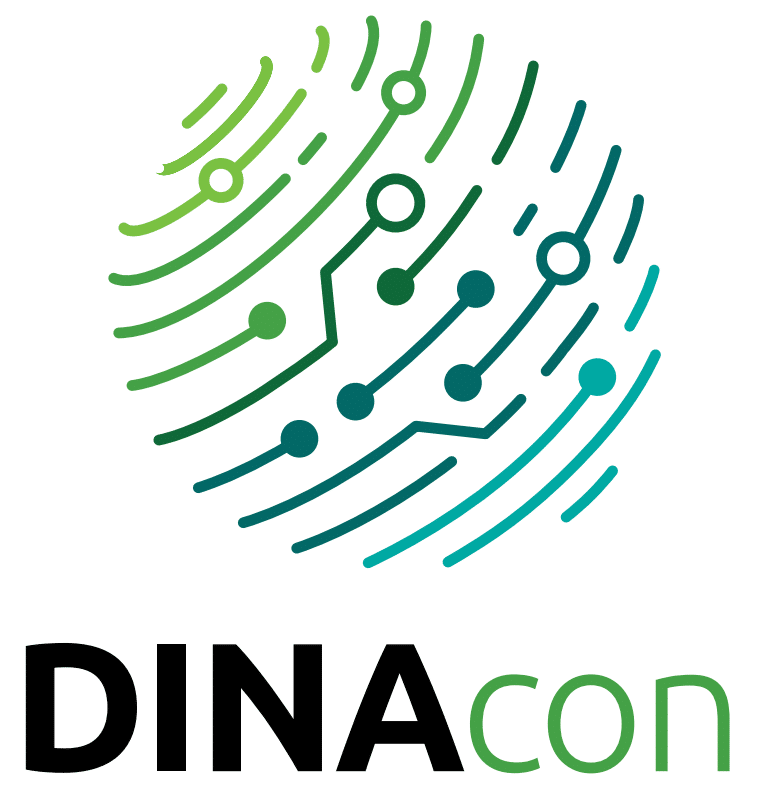